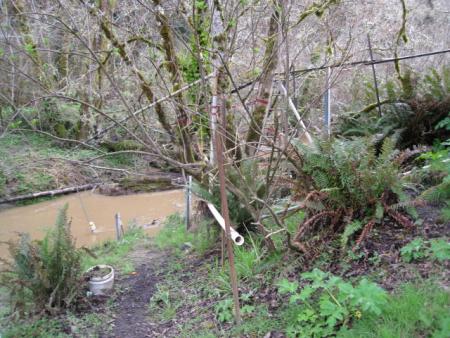 The Humboldt Bay Sediment Monitoring and Habitat Improvement Project was funded under a Proposition 50 grant for Non-Point Source Pollution from the State Water Resources Control Board.  One of the three components of the grant was supporting the efforts of Salmon Forever in conducting sediment monitoring, analysis, and reporting at monitoring stations established in Elk River and Freshwater Creek.  The two watersheds are the two largest tributaries to Humboldt Bay in Humboldt County, CA and support a variety of fish, but most notably they are critical habitat for fish species with a commercial and recreational interest including chinook or king salmon (Oncorhynchus tshawytscha), coho salmon (Oncorhynchus kisutch), steelhead trout (Oncorhynchus mykiss), and coastal cutthroat trout (Oncorhynchus clarkii). Coho salmon are on the federal and state lists for threatened and endangered species. These two watersheds also supply domestic water supplies to local residents. Residents began expressing concerns in the late 1990’s that the creeks were experiencing a new influx of sediment that was filling in pools, raising the elevation of the creek bed, and exacerbating flooding of their properties. In response a citizen monitoring group, Salmon Forever, was formed to conduct monitoring in the two watersheds.

Salmon Forever began monitoring cross sections in Elk River in 2001 and in Freshwater Creek in 2003, re-occupying cross sections established by others in 1999 and 2000 and adding additional cross sections, which have been monitored periodically since they were established. Salmon Forever also established two turbidity threshold sampling (TTS) monitoring stations in Elk River in 2002, collecting data continuously from Water Year (WY) 2003 through to present (Note: a water year begins Oct. 1 and ends Sept. 30 of the following year and is referenced by the year in which it ends, i.e., WY 2003 started October 1, 2002 and ended September 30, 2003).  In Freshwater Creek, Salmon Forever established their first TTS station in 1999 and added a second one in 2005.

Both watersheds are currently undergoing the development of sediment discharge targets through Total Maximum Daily Loading (TMDL) review and analysis.  A draft TMDL has been developed for Elk River and the TMDL for Freshwater Creek is under development.  The data collected and analysis conducted by Salmon Forever has contributed to the understanding of the sediment production in both watersheds and has been used by North Coast Regional Water Quality Control Board staff in their assessment of the sediment production in the two watersheds.