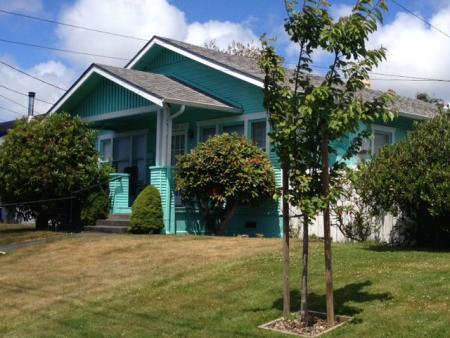 NRS has been working to plant trees along streets in Eureka since 2007, and has planted over 450 trees in Eureka from 2007 – 2012. An additional 175 or more trees were planted in 2013-2014. The planting is primarily focused on neighborhoods with high poverty and unemployment rates, lack of tree canopies, and generally unsafe streets and travel corridors characterized by high traffic speeds and vehicle collision rates. Many of these neighborhoods face a combination of disenfranchising factors and have, historically, not been at the forefront of City or other jurisdictional investments, leading to a sense of neglect and a general lack of prosperity. The project team engaged and worked with residents to increase investments into these neighborhood streetscapes, and worked toward a greater sense of environmental health and justice, improved stormwater collection and runoff reduction, and an increase in neighbors working together to improve their collective surroundings. The project has numerous tangible benefits to the focus neighborhoods and to the community as a whole, including: 1) Increased tree canopy throughout Eureka, with a primary focus on creating greater tree canopy in disadvantaged or severely disadvantaged neighborhoods, leading to improved air quality, increased property values and decreased crime rates; 2) Enhanced walking and cycling environment and safer routes to schools for children; 3) Builds community collaboration around the concept of urban and community forestry, traffic calming and overall aesthetic improvements, and continue increasing the bonds between schools, community organizations, the City, and neighborhoods; and 4) Provides educational resources, workshops and hands-on experiences that foster community cohesion and increased knowledge about the wide-ranging values associated with urban and community forestry practices. Additionally, the project provided information and skills to residents related to planting trees and tree care/ pruning. Finally, the project engaged neighbors, encouraged volunteerism, and provided an opportunity to build a sense of community, further increasing safety in neighborhoods.